Last night I went to a concert to see Underwoman and the Believers, including past NaCreSoMo-er Albert on guitar and violin. I noticed that for the most part the lines that each performer was playing weren’t actually that complicated; that wasn’t the point of this kind of music. So today, I tried to experiment with a very basic form of that in GarageBand…and then for extra kicks I also added a synthetic vocal line using UTAU-Synth.

To tell the truth, I wasn’t originally planning to use a vocal synthesizer. (I keep wanting to say “vocaloid” since that’s the most famous one.) But after getting the instrumental out this far I ran into several obstacles: I couldn’t come up with any good lyrics, my voice was in pretty bad shape after staying out two nights in a row, and I really wanted a higher vocal line than my natural range anyway.

At that point I was considering this half a song, or maybe a third: a verse, a bridge, and another verse. The next part should be a chorus, then another verse, then another chorus; not the most usual organization for a song, but certainly not unprecedented. But eventually I decided to give up on that and try something new. Experimentation’s a big part of NaCreSoMo…for me, anyway…and if I can try RPG Maker for the first time then I can try a singing synthesizer.

I did have a time finding a singing synthesizer that (a) would work on a Mac, and (b) was available for free, or at least a free trial. I eventually found a program called UTAU-Synth, which I was able to use thanks to a convenient English tutorial (and an English interface patch). The default voicebank that comes with the program doesn’t sound too great, so I looked through the wiki that the tutorial was on, and eventually picked one called “Ayako Tsukimorine” pretty much at random. I didn’t put too much effort into either picking the “best” voice or using any of the advanced features of the program; I just strung the samples together, exported the vocal line, and brought it into GarageBand to apply some further effects (mostly echo and reverb).

The lyrics here are only a few steps above nonsense; honestly I think they must have been inspired by the (campy) backstory for Escape from AT&T Park. But they’re in Japanese because that’s appropriate for singing synthesizers.

…wait, the first singing synthesizer was in English? Oh.

Even after all that, I’m not sure I’m too happy with using a vocal synth here; I like the rest of the arrangement more than the vocal line. Besides Underwoman and the Believers, I’ve managed to identify Tablo and Taeyang’s “Tomorrow” and OJ Law’s “Introverts” as musical influences for this song. Even if it is pretty simple.

You should definitely check out Underwoman and the Believers, though. They’re pretty good and not actually anything like this. I drew them a traced portrait picture as well. 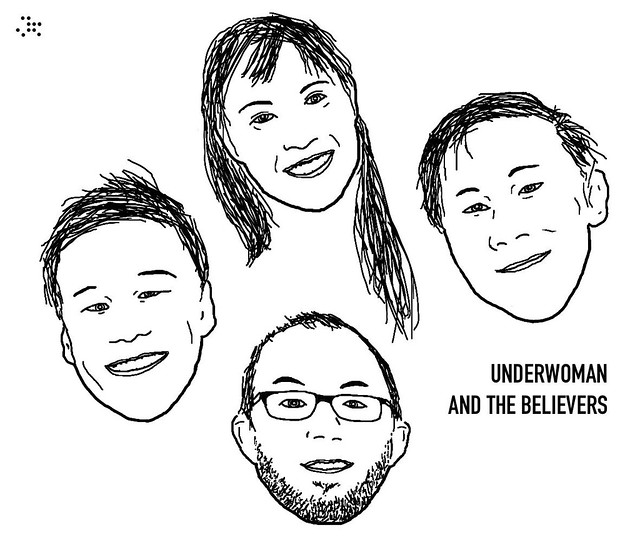 This entry was posted on March 27, 2016 and is filed under Creativity. Tags: Music, Song, Japanese, Digital art, NaCreSoMo 2016